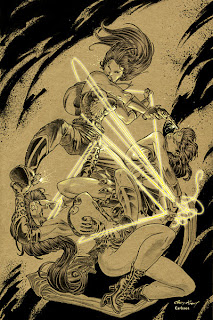 For those playing along at home, you may notice that I'm posting these covers in reverse order, (not so cleverly) COUNTING DOWN to the cover of #1 on Wednesday the 5th. Because that's how I roll.

It's been a quiet, low pressure week spent writing the third issue of the Adolescent Radioactive Black Belt Hamsters. I think this is going to be a sleeper book that will surprise a lot of people. Tom Nguyen is knocking it out of the park and with Moose Baumann on colors, it's gonna be pretty. It's good to know that even if I write a lousy book, those boys will save me with their talented ways.

In exciting news, I'm working with Doug Mahnke on my next project for DC! Between Tom and Pat Gleason and now Doug, I'm very lucky to have worked or be working with the trifecta I affectionately call the Minnesota Wrecking Crew. Doesn't get much better!
Posted by keith champagne at 8:02 AM 4 comments: 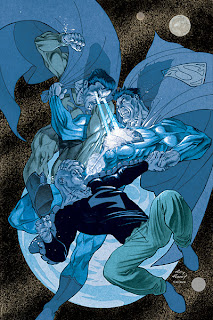 This is Andy Kubert's cover to ARENA #4 and isn't it great? This is the first time I've seen it in color and I just had to share.

I really love all four covers that Andy pulled off on this series. They're definitely distinctive, no other book will look similar to ARENA next month and that's the hallmark of good cover art. They really stand out.
Posted by keith champagne at 7:35 AM 5 comments:

Why Flash, what a big lightning bolt you have! 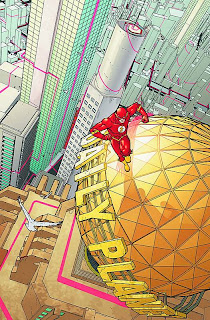 DC released their February solicit info today, and here's what I've got cooking for the shortest month of next year.

Wally West is at a crossroads — now that he’s got a family, how does he provide for them when he’s never wanted to be anything else but The Flash? The question dogs him throughout an adventure high above Metropolis in this moving stand-alone tale by guest team Keith Champagne (GREEN LANTERN CORPS) and Koi Turnbull (SUPERMAN CONFIDENTIAL).

Usually, it comes down to the writer of any given issue to provide the solicitation blurb for the story but in this case, I think editor Joan Hilty went old school and did it herself. I might have put more focus on the twins but the info provided does the trick. It even says the story is "moving."

Didn't much care for the idea of the twins when I first heard about their role in the new direction of the title but after writing them, I have to admit they were the most fun part of the issue. I'm a softie for kids though.

Not sure what I'll have solicited next. I wrote an issue of Action Comics but I'm unsure when that will see print. Rick Leonardi is drawing it though, which is pretty cool. Just about to stop inking and get back to writing full-time on a prestige format series for DC but I can't say what it is yet. I guess even if I don't have anything in the solicits for a few months, I'll still be here, working away.

OH, and I should definitely mention that Adolescent Radioactive Black Belt Hamsters #2 will also be shipping in February! I'm loving how this book is coming together, hope you all will give it a try.

(Look, I made it through a whole post without mentioning Arena!)
Posted by keith champagne at 5:37 PM 3 comments:

I forgot to mention that I learned the results of the Arena fan voting a couple of weeks ago. Obviously, I can't come right out and say who won which battles, I do want to work again afterall. But I will say that two of the four winners were the ones I expected, one outcome was a moderate surprise but not completely unexpected, and one was way off base with my own line of thinking. Not that it makes any difference creatively, we have contingencies to cover every possible outcome. Just that in one case, I was completely surprised.
Posted by keith champagne at 6:09 PM No comments:

As the shipping date for the first issue of Arena gets closer and closer, expect the pimpage to really get sickening...but at least it'll be different kinds of pimpage, I think I'm pretty much done with my interviews at this point.

And here's a link to all four of Andy Kubert's glorious covers:

In other comic news, Robin Annual #7 has sold out across this great nation of ours and is going into a second printing. I thought that was pretty cool news! And also, for my millions of New York area fans, I'll be signing at Jim Hanley's on December 6th from 6:00-8:00. I have it on pretty good authority that Big Poppa himself, the mighty Jamal Igle will also be on hand to draw in the female crowd.

Come check us out!
Posted by keith champagne at 5:38 PM 6 comments:

I noticed to my surprise today that I have a couple of things hitting stores tomorrow, trade paperpacks collecting some of my writing work from Green Lantern Corps and World War III.

The two pieces (or is it bodies?) of work being collected got a very different reaction from the Internet comic readers which, surprisingly, was exactly the opposite of my own feelings. Funny how that often happens; I think one thing about my work and the rest of the world thinks another.

Green Lantern Corps (#7-9, collected in the Dark Side Of Green trade) was, from what I could gather, pretty warmly received by readers. At the time, I was very happy with the reception the story got, it did a lot to help the powers that be think of me as an actual writer (as opposed to an inker dabbling in scripts). I grew a lot as a writer, figured out some things about how comics workover and Pat Gleason drew the hell out of them but...they're far from perfect. There are nice bits in there but the pacing is a little weird at points and I ran out of room in the third issue (something that also happened to me on the JSA stuff I wrote).

World War III, on the other hand, got a quite chilly reception among the Internet crowd. I feel that if one were to read it now, separated from the hype surrounding the initial release of the book, they would enjoy it much more taken as what it is: A continuity patch for almost the entire DCU, as told through the eyes of The Martian Manhunter.

WWIII will always be the job that made me feel like I was an actual writer and not just an inker dabbling in scripts. It was demanding, full of constant behind-the-scenes mandates and changes, written under impossible deadlines, and tied together fifteen different plot points while finding ways to relate them to the actual war against Black Adam. The assignment taught me to write on demand as opposed to daydreaming leisurely about story beats and tying them together at my own pace (which is how I wrote the GLC stuff).

I loved working in conjunction with John Ostrander and got my first taste of how sharp Siglain is when it comes to story editing. You're only as good as your editor and between Tomasi, Siglain, and rising editorial star Gearline, I was in the best possible hands with World War III.

It wasn't too very long ago that I was ridiculously frustrated and unable to catch any sort of break as far as getting any writing work in comics. So having two things I've written released in collected form on one day is a nice reminder that, while every inch forward is still a battle, when I wasn't looking my career took a few steps in the direction I've been striving for.

And while I've learned to take the Internet with a grain of salt, I hope we have the same opinion about Arena.
Posted by keith champagne at 7:08 PM 7 comments: