I have a small window of time coming open in my schedule in the near future, probably a week or two at most, and I've had something in the back of my mind for a while that I thought I'd give a try to. No, not dancing on tables...get your mind out of the gutter, Mr. Ninja!

I've been thinking off and on for a couple of months about offering my services as a consultant for artists or writers trying to break into comics but looking for some professional insight and work advice before they submit their work to editors. A professional critiquer (is that a word?), if you will.

Having written, pencilled, inked, and colored at different points in my career, and been working full time in this silly industry for sixteen years now, I feel I've got a little credibility backing me up. Keep in mind the old adage about opinions and assholes, though. I don't have all the answers but I do have strong opinions about what makes a good comic, from story on down to lettering. I've also got a lot of good survival tips when it comes to navigating what can be a backstabbing, two-faced, cutthroat business. My opinion certainly isn't the end all, be all of anything, but I figure maybe it's worth listening to.

Or not, I guess we'll find out.

So if you've got a pitch or script you're trying to get off the ground, some art samples you'd like to have critiqued, a comic you've produced and are wondering how to get it to a wider audience...and on and on, feel free to drop me an email at keithchampagne@gmail.com. I'm not sure what to charge for this kind of services, I need to ask around a bit with a few people I know who do this sort of thing, but I'm pretty sure no one will go bankrupt.

Next time I blog, I'm going to announce a new project.
Posted by keith champagne at 5:35 PM 1 comment:

Back to The Mighty 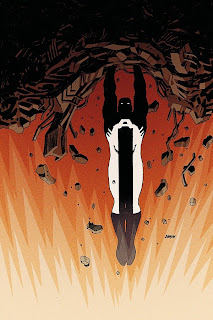 DC releases their solicitations to May this afternoon so, real quick, here's Mighty #4 with my little comments after the blurb...

Fire on the horizon! Cole’s wife Janet is beginning to have deep misgivings about her husband’s trust in Alpha One – but where can she turn? You won't believe this issue's shocking finale, as the world of THE MIGHTY suddenly becomes deadly. And we're just getting started!
On sale May 6 • 32 pg, FC, $2.99 US

Me again. See those words "SHOCKING FINALE," there? Well, the last page is where the larger picture of this story will suddenly slam into focus and the reader will get an idea of what they've actually been reading all along. Fasten them safety belts, here comes the ride!
Posted by keith champagne at 2:10 PM 3 comments:

What? Not about The Mighty?

I don't usually try to think too far ahead of LOST and figure out all the different mysteries of the show. I'm content to just follow along at its own pace and enjoy the answers as they come. But as I was driving yesterday, I came up with half a theory I thought I'd put out there.

In the same way that John Locke has seemingly had to die to bring the Oceanic Six together and back to the island, what if Christian Shephard died to bring the original Lost crew to the island? I have no idea about the why of it but I like the cyclical nature of my theory.

Feel free to discuss amongst yourselves.
Posted by keith champagne at 11:57 AM No comments:

Settling back in from my two weeks of travel and glad to be safely ensconced at home base once more. I took a few minutes tonight to do a quick skim of different comic review sites (thanks to "The Husband" for tipping me off to the CBR review) to see how the Mighty #1 is faring and I'm happy to see that readers seem pleased with the first issue. Very happy.

Last year, I did an online commentary track for the fourth issue of Arena and I thought I might try something similar for The Mighty, giving out my thoughts on each issue a week or so after it comes out. If you're already bored with reading about the book, have no fear! I'll blog about other boring things, too! I'm at least a two trick pony.

First issues are tough because usually, they involve so much stage setting and introduction of characters, that getting to the meat of the actual story can be a bit tricky, a balancing act that Tomasi in particular is good at. I think we established the overall tone of the book well, along with hinting at some character background that will come into play in a big way, and most importantly, establishing the mystery aspect of the story. I think people were also surprised to see that Alpha-One, the superhero of the story, is at least starting out in a supporting roll and that the lead has gone to Gabriel Cole.

Two names to keep fresh in the back of one's mind: Taylor Rhines and Dominic Deeds. Both are ex-captains of Section Omega who ended their tenure in very different ways, Rhines apparently going bugnuts crazy from the pressure while Deeds seems to have taken the Tom Clancy route with his retirement. Somewhere in the first five issues, these guys play into the story. It'll be helpful to remember them.

One comment I saw in a couple of different reviews was that the book felt very familiar, with Alpha-One being an analogue to Superman, and the fact that we homaged a few comic book tropes (Jimmy Olsen's signal watch, the more-powerful-than-a-locomotive iconography) to set the stage. Obviously, these were deliberate choices as was Alpha-One not actually speaking throughout, establishing him as a presence more than a personality. Peter and I want you to be comfortable, to feel like you immediately know and-- more or less--understand this world from a lifetime of comic book reading. There are layers to be peeled back and twists and turns coming. Just because you might vaguely feel like you've seen it all before doesn't necessarily mean you really know what you're seeing.

One other thing while I'm thinking of it. In our minds, PT and I wrote this series as chapters in a novel. Each issue is a different chapter in the overall story. It's paced a little differently than a regular comic as a result, another choice we deliberately made to serve the story better. I'd suggest if you like what you're reading, try to re-read the previous issue the night before you read the next one. If you're like me, you forget every detail of a comic you read in the four weeks it takes to get the next issue. I even sometimes forget the details of what I'm writing in the time between producing the next script. I've learned the hard way that a little refresher never hurts, that's all I'm saying.

Catch you next time, thanks for reading.
Posted by keith champagne at 5:21 PM 3 comments:

A brief layover back in CT on my two week world tour.

While I have a second, I wanted to ask everyone to please pick up a copy of Mighty #1, on sale this Wednesday. And let me know what you think in the comments section, by all means.

I'm a little partial but I really feel that by the time the fourth or fifth issue of this book hits and the story is really rolling along, people will feel it's the best title DC is currently publishing.

Let's find out if I'm right.
Posted by keith champagne at 6:52 AM 6 comments: