Turns out my new project wasn't announced at Wondercon after all, although I had it on good authority it was going to be. I even did an interview for Newsarama in advance so they'd have something to run with once they could.

I will say that I'm working with Doug Mahnke on this project and, based on the pages I've seen so far, he's pretty much the greatest artist I've worked with, no bullshit, and definitely the perfect guy for this series. And I don't mean any disrespect to any of the amazing talents I've been lucky enough to work with, guys like Ordway and Byrne and Gleason and Pearson and Leonardi, I've worked with an all-star team of greats. Doug's pages took my breath away with their sheer awesomeness.

In a bit of other news, I've returned to the trenches as an inker for the next few weeks, doing an issue of Countdown with my main man, Jamal Igle. When I'm asked to ink Jamal, I say YES. It's one of my rules in life, it's always a pleasure to work over his beautiful pencils. I'm a little rusty, haven't inked a page in a few months now but I'm shaking off the cobwebs and enjoying myself. Jamal and I did an issue of 52 together and I'm glad we'll also have an issue of Countdown under our belts. And be sure to pick up his Tangent project, dammit!

That's all for now, over an out!

Thanks for reading,
Keith
Posted by keith champagne at 7:47 PM 7 comments:

May solicits and Wednesday's books 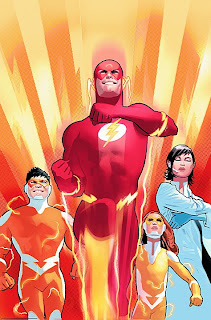 Hi, I'm Joe Blogger. I sure do blog quite a bit lately. Not bad for someone who can't string five words together when talking about himself in real life.

First off, THE FLASH #237 is in stores tomorrow. I'm happy enough with the script I wrote, always room for improvement but I think it worked out OK. The book is drawn by Koi Turnbull and inked by Art Thibert.

I tend to try to build to emotional beats in the writing, whereas Koi is more of an action artist. So, it was an...interesting...meshing of approaches. I can't say I love every choice he made in the storytelling but he definitely surprised me more than once and told the story his way. That's really what I hope for from artists I work with, that they bring their own sensibilities to the work. Got that with Koi in spades.

I was also surprised to get a box of Scooby Doo comics in my comps the other day. Last year, I wrote four Scooby stories and haven't heard anything about them but the first, Snacks On A Plane, is in Scooby Doo #129 tomorrow.

All four Scooby stories are dear to my heart. It was a lot of fun to work with Scoob and the Gang, the sort of neat little job that would be fun to share. The stories I wrote are like little gypsies, floating around out there in the great big world and beginning to surface when I least expect it.

So SNACKS is the first one out there for the world to see.

As far as solicits go, first up:

Superman embarks on a journey with a dying man who has been in the background of the Man Of Steel’s life from the very beginning. As they search for answers to the strange riddle of the man’s life, they also find themselves ambushed by…The Parasite!
On sale May 14 • 32 pg, FC, $2.99 US

Wally West returns to active duty as the Flash — with the addition of his two children — in this amazing hardover collecting THE FLASH #231-237, guest-starring the Justice League! What’s his dark, dark family secret — the one that’s helping him keep the peace in Keystone? This volume also includes "The Fast Life, " by Mark Waid, John Rogers and Doug Braithwaite — the compelling tale of the West family's life on a Flash-friendly alien world.
Advance-solicited; on sale July 30 • 160 pg, FC, $24.99 US

Funny that the Flash issue which ships tomorrow is already part of the upcoming hardcover collection. I've never had anything I've written collected into HC before, I'm glad to ride Mark Waid's coattails to the super-deluxe treatment. It was a nice surprise when I read through the solicits.

The Superman issue is a dream come true for me and a strong step in the direction of the kind of writer I'm struggling to be. Ironically, the story is based on an idea I had when I was about 17 and which I finally got to use twenty years later. So I guess I knew the kind of writer I wanted to be when I was a kid and now I'm finally getting around to trying. A lot of love went into the Superman issue.

Well, I think that's plenty of blogging for tonight. Hell, that's plenty for February, really. But I'll probably pop back in soon, DC is announcing my new project this coming weekend at WonderCon.

Thanks for reading.
Keith
Posted by keith champagne at 5:26 PM 3 comments: 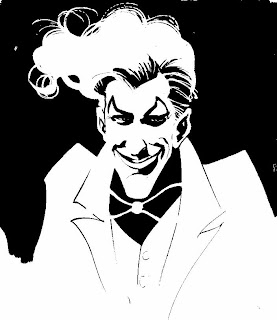 I've been thinking about the Joker a lot lately, must be something to do with the upcoming Batman movie. So I did something that I very rarely do: I drew a picture.

I remember reading a while back about how Jim Lee approached a sketch he did, painting the paper black and then working in white out on top of the black. It sounded like an interesting process so that's what I tried to do. I laid down a large black area, then blocked out the white of the face/hair and contour of the shoulders with pentel white out. Then I took a brush and tried to add features and rendering in black over the white, so the finished drawing is three layers (in some areas five or six as I kept whiting out and trying to correct my many mistakes)and weighs about a pound.

Maybe I should have tried to pencil it first.

The moral to the story is I'm no Jim Lee. But here's my attempt, warts and all, for the world to make fun of. No false modesty here, there's a reason I spent so many years inking and not pencilling. I could always say it sucks because Tom Nguyen has my good brushes in a box in the trunk of his car but that would just be making excuses.

You know who would draw a really kick ass Joker? Doug Mahnke!
Posted by keith champagne at 2:29 PM 10 comments:

I'd like to interrupt this regularly scheduled Valentines Day to say that my heart belongs to the new Indiana Jones trailer burning across the web. Especially that little glimpse of a box that says, "Roswell, New Mexico" because Indiana Jones plus Aliens equals awesome-sauce.
Posted by keith champagne at 10:16 AM 2 comments:

After taking a very rare sick day yesterday, I log on today and learn that Steve Gerber, a well known and well respected writer for Marvel, DC, Malibu and lots of animated shows, passed away a few days ago.

Mr. Gerber is probably best known as the creator of Howard The Duck for Marvel, he's synonomous with that character. I personally always loved his work on Man Thing, that's probably the stuff he did that clicked with my young mind the most.

I never met, spoke to, or emailed Mr. Gerber although I had heard through the grapevine that he was awaiting a lung transplant for pulmonary fibrosis. In spite of the fact that I had no personal connection to the man, I'm honestly saddened by his loss. As seems to happen in this field, seeing a person's name in the credit boxes over the years becomes almost a steady backdrop to my life. And now, another name goes missing.

My best to Mr. Gerber's friends and family.
Posted by keith champagne at 8:13 AM 2 comments: 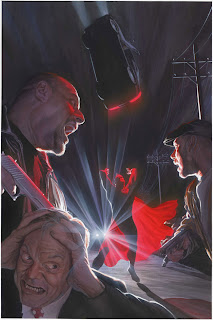 OK, so this morning, DC announced that James Robinson will be writing Superman after Kurt Busiek leaves the book. They also released a cover image which, if you really want to know, is the great Alex Ross' cover to MY issue of Superman, which is being released in May after Busiek ends his run but before James begins his.

People that know me well know that I love no character more dearly than I do Superman. Getting to write the man o' steel is a serious career highlight for me and I hope that my love for the character shines through bright and strong.

Seeing as DC released the image, although in the wrong context, I would assume it's now safe to post the cover here. See that guy clutching his head in the lower left? My story is about THAT guy. Rick Leonardi kicked serious ass drawing it, too. Should be officially solicited in a just a few days.

This marks the FOURTH time I'll have an Alex Ross cover on books I've written. I must have blown somebody really important in a previous life.
Posted by keith champagne at 8:58 AM 6 comments:

I didn't realize it at the time but yesterday's post was my 200th since I started this blog a couple of years ago. I should have had a party.

Well, Mr. Don Chin, the creator of the original Black Belt Hamsters, suggested not one but five ideas for topics and, because I'm an overachiever, I will henceforth cover all five. Gracias, Don.

Here's what he suggested:

First of all, I'm not a huge sports fan. The only thing I follow with a passion is mixed martial arts. Everything else, I pay a general amount of attention to. However, I'm glad the Giants won. I have no particular dislike for the Patriots but in general, I prefer it when all New England sports teams suck. That's pretty much what I grew up with and that's the way I like it. The Patriots are great, the Red Sox are world series champions, even the Celtics are getting it done this year. For all I know, the Bruins kick ass. It's like living in bizarro world and it freaks me out, man.

I don't watch American Idol. My mom does, my brother Kenny does, but it never grabbed me. I'd like to say I'm far too macho for American Idol but I did have a brief love affair with Dancing With The Stars, so that can't be the case.

Off to a great start. I sort of wish the only two people left on the island were Ben and Locke, and every scene featured those two going at it but c'est la vie.

I'm digging the flash forwards but I do hope all the old mysteries get solved instead of buried under the new mysteries created by the glimpses into the future.

Love this show, it's the only thing I make a point to watch on a regular basis. Excited to see where it goes.

Hillary. This country desperately needs socialized medicine and it's gotta still eat at her soul the way she got crushed by the health insurance industry fifteen years ago. Plus, you can't ignore the fact that Bill Clinton will be sitting on the sidelines again.

5. Boxers or briefs? (Or in Tom Nguyen's case, speedos)

Briefs make me feel like a young boy getting a hernia check from the school nurse. And everyone knows Tom wears ladies thongs.
Posted by keith champagne at 7:36 AM 3 comments:

I was going to update my blog today but I ran out of time. But hopefully, tomorrow I'll be on it. Also, hopefully I'll think of something to write about. Anyone have a topic I can steal?
Posted by keith champagne at 1:52 PM 1 comment: