Not much on my mind lately, hasn't been a great deal to blog about.

The NY convention came and went and I enjoyed my time there. Conventions are more or less like a big reunion where, every five steps one takes, you bump into another long lost colleague or friend. It was a productive show in terms of generating writing work, with a gig now upcoming from Marvel and an intriguing opportunity mentioned to me by Rob Levin from Top Cow that got my imagination sparking. I'm increasingly interested in working outside of DC. After fifteen years, it seems like a good time to start stretching my wings so I'm glad to see opportunities opening up to allow me to explore what's out there.

Next up, I'll be in Seattle the same weekend as the Emerald City Convention. While I'm not flying out specifically for the show, I'm sure I'll spend some time there. The weekend after, I'll be in New Hampshire for GraniteCon's 5th anniversary show, followed by AdventureCon in Tennessee again this year. Both were shows I was invited to last year, both well run, and I'm grateful to be invited back to each.

If all goes according to plan, we should have an exclusive, limited edition full color comic to unveil at Adventure Con. Who is 'WE?' Wait and see!

That's all the news I can think to blog about right about now. But check back in soon if you're so inclined. I'll try not to be so boring next time.

Thanks for reading,
Keith

Two blog updates in one day, although I wish I didn't have to post this one. This is DC's brief release regarding the issue of Superman I wrote, originally scheduled to arrive in stores next month. I'll have more to say on the other side...

In this story, originally scheduled to appear in SUPERMAN CONFIDENTIAL #9, writer Vito Delsante and artists Julian Lopez and Bit tell the tale of how the Man of Steel met the original Emerald Sentinel, Alan Scott! As a mysterious team of scientists tracks a dangerous threat headed toward Metropolis, Superman learns the first lesson of super-heroism from the man who wrote the book!

This issue also will feature a new, previously unseen cover by Alex Ross.

Because of this change, this issue will be made returnable at a later date.

I'm not at liberty to say why there was a last minute content switch for this issue but I will say it has nothing to do with the quality of the story or art. It's the best comic I've written (in my humble opinion) and Rick and Dan did a great job. I was told our issue wasn't killed, just postponed although I can't say for how long.

It's frustrating, especially with my still-unannounced project w/ Doug Mahnke pushed to the fourth quarter of this year. I'm left with very little on the stands that I've written for most of 08 at this point, at least at DC. So don't forget about me while I'm gone and hopefully, when the complications surrounding this Superman issue get resolved, everyone will get to see it.
Posted by keith champagne at 2:23 PM 7 comments:

The New York Convention is this weekend and, while I don't have a table, any of my millions of fans can find me signing at the DC booth at the following times:

Hope to see you there!
Posted by keith champagne at 6:53 AM 2 comments:

I'm going to take a rare break from blogging about myself to mention an independent comic that a friend of mine, Derek, is editing. Quality independent comics can sometimes have a hard time finding an audience, especially those coming from a new company. So keep this one in mind when you place your orders at your local comic shop. From everything I've seen, it looks (and reads) excellent.

The company publishing it was started by William Katt, who most of us probably know best from Greatest American Hero (did he ever learn to use that suit?). He was smart to bring Derek on board and Team Catastrophic has put together a comic that is well worth your time.

Check out the link below and learn more about it.

Does it bother anybody else when characters "sing" in comic books? One of those things that just bugs me.
Posted by keith champagne at 8:21 AM 6 comments: 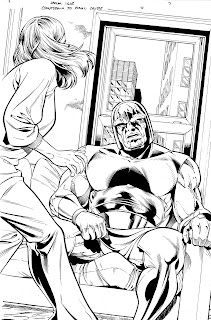 Just enough time before I rush off to pick Jack up from preschool to post this, the full version of the Darkseid page from Countdown #4.

The printed version was cropped and zoomed in on in a way that was quite different from the original page. Not sure why, maybe Darkseid looks especially silly lounging in a recliner? Maybe he's flashing too much junk from beneath his tunic of evil?

Mine is not to question why. But here's the original page!
Posted by keith champagne at 9:00 AM 4 comments:

The night before Jack's birthday... 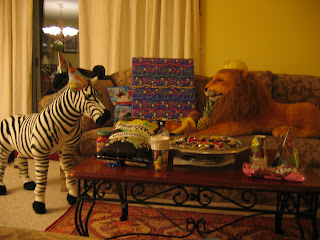 Found the cable to my camera.

By the way, feel free to check out COUNTDOWN #4 this week, art by Jamal and myself. Very weird cropping on the Darkseid page, what was going on there I wonder?
Posted by keith champagne at 1:33 PM No comments:

State of the union

Jack had his fourth birthday a couple of days ago so, as of today, I've now spent the last 1462 days with this most remarkable little fellow--give or take a few days away for convention obligations. He doesn't seem tired of me yet; in fact, he seems to enjoy my company almost as much as I do his. Sure, once in a while he needs to put me in time out because, y'know, Daddy is crazy. But I try to learn the lessons he teaches and apply them to my life. For instance, The Wiggles really do grow on you if you listen to the same CD on an endless loop in the car for two straight years. Jack was totally right, I'll never listen to FM again!

For Jack's birthday, we took all of his cousins, aunts, uncles, grandparents, and some neighbors/friends to a showing of Horton Hears A Who, followed by jungle-themed party, pizza/cake/presents/pinata back at Chez Champagne. It was a lot of work getting everything ready in the few days leading up to the bash but all in all, it worked out really well. I would post a picture but I can't find the cable to upload them from my camera to the computer.

In a reflective moment, I looked around at all of the kids at Jack's party and it hit me how fast all of them are growing up. I remember being afraid to hold them all when they were born and now a few of them can (and do) beat the tar out of me. Life seems to move so slow but when I look around, these years are passing in the blink of an eye. The last four years moved so fast, it's humbling.

I love my son more than anything.
Posted by keith champagne at 6:48 AM 4 comments: