Just a quick update to my schedule in San Diego.

Like I mentioned before, I'll be playing in the DC Versus Marvel softball game at Balboa Park on Thursday afternoon. The rest of the intrepid Taco Trio, Tom and Andy, will also taking the field, all to raise money for The Hero Initiative.

Speaking of, also as mentioned before, Andy and I will be appearing from 10:00-11:00 on Friday morning at the Hero Initiative booth.

In brand new scheduling news, I'll be appearing at the DC Booth from 10:00-11:00 Saturday morning, and will most likely pop up on one of the DCU panels that same day. I believe I'll also be at the DC booth sometime on Sunday at a time still to be determined. I have a few different meetings scheduled throughout the course of the show but I should be left with a bit of time to enjoy the actual convention itself.

I have no idea what kind of panels and presentations are scheduled this year but I'm interested in checking out the presentation for the Iron Man movie, so I'll be keeping an eye out for that one. I also try to attend as many Marvel Universe panels as possible; it's always good to keep up with the latest projects and to keep track of what creators are newly exclusive, who's working on what etc. Working in the industry, I find that's important stuff to keep abreast of.

If you're going to be at the show, please come and say hi. See you there.

Posted by keith champagne at 7:10 AM 2 comments: 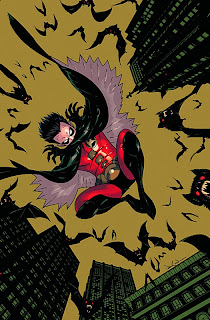 DC released their solicitations for October today. I figure I should get in the habit of highlighting things that I've done for any given month when they're solicited--because this is my blog and it's mostly all about my silly little career in comics. So, here goes.
First up, is...
ROBIN ANNUAL #7
Written by Keith Champagne
Art by Jason Pearson and Derec Donovan
Cover by Pearson
A special issue tying into next month’s Batman event, “THE RESURRECTION OF RA’S AL GHUL”! Fan-favorite artist Jason Pearson illustrates “The Festival of Angry Ghosts,” featuring Damian. Plus, in "The Great Pumpkin," Robin races the clock to solve a series of Halloween-themed murders so grotesque, they leave even the most jaded detectives in Gotham shocked. Plus, a special “Times Past” story focusing on Dick Grayson's first Halloween as Robin.On sale October 31 • 48 pg, FC, $3.99 US
Then, there's...
WORLD WAR III TP
Written by Keith Champagne and John Ostrander
Art by various
Cover by Ethan Van Sciver
Collecting the 4-issue miniseries WORLD WAR III! Chaos has broken out across the globe, and the grim reality leads to the loss of a Teen Titan. The fate of Aquaman is revealed, a hero is reborn, and the DC Universe bands together against the wrath of an ancient evil! Advance-solicited; on sale November 7 • 128 pg, FC, $17.99 US
And, while it's listed incorrectly in the credits, the Pat Gleason cover I mentioned inking a couple of weeks ago is for Robin #167. I'll probably post up a copy of that on the Tacotrio blog.

There's actually a really long story behind the story for the Robin annual which I'll probably tell either in an interview or on the blog as it gets closer to publication. I'm happy to say that, although I've kept busy writing, the annual will be the first thing I've written that's due to be published since World War III shipped in April. That's kind of a long time to be gone from the stands so I'm happy there's an end in sight for the drought.

I'm excited to have WWIII collected. Talk about long stories behind the stories, that was about as twisted and hectic a process as they come and I'm very proud of that project.
Unless something I've done is reprinted for November, I actually don't think I'll have anything solicited, either as inker or writer. I'm not sure about this but I think that might literally be the first month in almost ten years that my name hasn't been attached to something. What a crazy, Cal Ripken-like streak.
I'm happy to say that DC's December solicits will contain not one, not two, not three, but FOUR books I've written shipping that month. I believe it will all be announced in San Diego next week so I'll have more details soon.
Take care, thanks for reading.
Posted by keith champagne at 7:58 PM 6 comments:

If you've noticed the lack of updates over the last week and a half, it's because things have been increasingly hectic as the San Diego convention looms ever closer.

Which seems like a good segue to mention that I'll be bopping around the San Diego Convention Center two weeks from today--which is surprisingly soon, I didn't realize the con was so close.

I don't know my appearance schedule for DC yet and I won't be set up in artist's alley. I do know I'll be playing on the DC softball team in the charity game against Marvel on the 26th at Balboa Park. I'll also be appearing from 10:00-11:00 Friday morning (joined by Andy Smith) at the Hero Initiative booth, which is a great charity and worthwhile cause. Aside from that, it'll just be meetings and signings, catching up with my convention friends ( the guys I only get to see when I bump into them at a show), and trying not to get trampled by the 80-100,000 people converging for the convention.

In other news, I picked up the Eternals hardcover at Borders the other day, which has confirmed for me that John Romita Jr. might just be our greatest American Superhero artist. He just does everything right, plus has a 'power' to his work that can't be taught. It's either there or it isn't and JRjr's got it in spades. Danny Miki is an interesting choice to ink him and y'know, that Neil Gaiman guy ain't no slouch either. I read the first chapter so far and I enjoyed it quite a bit.

Seems like it's been a while since I've actually posted anything more than short notes to the blog so...this is what I'm up to.

It's been just about two months since I started writing full-time on this mystery project for DC. Up until this past weekend, I hadn't even touched a brush or pen to ink anything but on Friday, Mike Marts offered me a Pat Gleason ROBIN cover to ink and I said yes. I love Pat's work, plus I like working with friends, and it seemed like a good time to dip my brush and keep my hand steady. Pat's stuff is never easy but I found this to be a particularly hard cover to ink. I like some of what I did, like Robin's face, and am not as pleased with other bits of it like the blood.

Oh yes...there will be blood.

I'd post a scan but I don't think I'm allowed to yet. The cover should be released in the Diamond Previews for October which, coincidentally, will also contain something Robin-related that I wrote for Halloween.

I'm about 3/4's done with the mysterious, unknowable DC assignment at this point. I'm having a lot of fun writing on a full-time basis but I have to say, there's been an adjustment period. There's a very different rythym to writing and inking. When I ink, I'm a soldier. I get behind my table and grind away the long hours until a book gets done. With writing, there's usually a bit of down time while I wait for an outline to be read, or to get permission to use such and such a character or, say...to kill another off.

I don't do well with down time; I've been programmed over 14 long years of inking to keep slaving away, whatever it takes to meet the deadline. So I find that instead of waiting for an outline to be approved, I just start writing the script to stay busy and hope it all works out in the end. Which is stupid and counterproductive because eventually, it won't.

I think the lesson here is I need to learn to relax.

I'm taking a break from the DC project this week to write a sixteen-page back up story for an upcoming annual. On Friday, I'll be heading to New York to go over some things with my editor and to meet with Dan Didio, hopefully about what comes next after this project is wrapped.

All in all, to date, it's been a good summer.
Posted by keith champagne at 5:38 AM 4 comments:

Just wanted to take a second to once again pimp out the group blog that Tom Nguyen, Andy Smith, and I contribute to over at www.tacotrio.blogspot.com.

Lots of cool videos, sketches and the like--plus with three of us posting, it tends to be updated more often than my blog here.
Posted by keith champagne at 3:55 PM No comments: