The blog has been on a bit of a hiatus over the past month or so, unintentionally. My work schedule is going to ease up drastically in a few more days and, without a seemingly daily deadline looming over me for a bit, I'm looking forward to tackling a laundry list of topics I've compiled.

Check back soon, thanks.

Keith
Posted by keith champagne at 5:27 PM No comments:

Welcome to the Island of Sodor 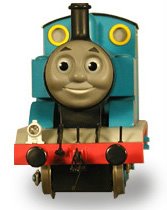 When you have a two year old, one often finds oneself watching programs and buying DVD's that might very well not be to one's own taste, but rather to the tastes of said child.

Which is why, these days, I'm living in the world of Thomas the Tank Engine and his various friends, be they steamie or diesel. My son seems fascinated and, dare I say, enchanted by the adventures of the intrepid Thomas. Over and Over and Over and Over again, they just never seem to get old. To him, anyway.

Gotta say...if I actually lived on the island of Sodor, unless I was suicidal there is no way in Hell I'd ever step foot on a train. First of all, they're all alive which is pretty freaky when you think about it. You've got a mischievous train and a vain train and a creaky old train and don't even get me started on the diesels. Those guys are dicks.

More importantly, it seems to me that taking a train ride around that island is akin to taking one's life into his or her own hands. I've never seen more derailments or landslides or trains crashing into each other or avalanches or pretty much any other dangerous situation, up to and including being pelted by giant dead fish. If you ask me, there should be a federal investigation and good ol' Sir Top'emhat should be replaced by an actual civil engineer with some sort of job competence. His entire public transportation system is on the verge of perpetual collapse.

Get in your cars and drive, good people of Sodor.

Before it's too late.
Posted by keith champagne at 12:54 PM No comments:

Well, it's been a pretty long time since I've updated the blog, over a week now and some spare change. I'm honestly busier than I ever have been right now with Batman and Firestorm. Batman especially is a deadline nightmare; we started way behind schedule and have been playing catch up since day one. Even now, I'm typing this while taking a break from working at 9:30 on a Saturday night. I can still remember the good old days, way, way back in 2005, when Saturday nights were built for fun. Or whatever passes for fun when you're in your mid thirties.

I've been trying to think of a way to get more people to post comments here. And yes, I do realize the easiest way would be to write something interesting here instead of the usual drivel, no need to mention that. I know there are well over a thousand people that read this blog so it might be fun to get more of a discussion going. I was thinking of maybe having a contest or something along those lines, if anyone has any ideas...post them.

The Pride New Year's Eve card was decent although a few fights I was interested in seeing were edited off the card because of time constraints. I particularly wanted to check out the Alexander Emelianenko/Pawel Nastula fight which I've read after the fact was a barnburner. I was glad to see Sakuraba win again, his second in a row but man...he looked like he was half asleep. Where'd the lightning fast Sakuraba of a few years ago disappear to?

The movie Munich was good but not great. I have trouble rooting for a guy running around killing people unless that guys' name is Arnold Schwarzenneger, dammit!

Thanks to the boys for trekking out here for a fun night out. Good friends, good company.

Back soon with something interesting...I hope.
Keith
Posted by keith champagne at 6:28 PM 2 comments: