Arena #4: The war to settle the score

And the last issue of Arena arrives in stores today, ending what was a fun work month for me. It's been enjoyable hearing the different reactions to the series after working in a bubble on it for so long. I don't have my printed copies of the last issue yet, shipping seems to have been thrown off by the holiday. But I was very happy with the PDF that I proofread earlier this month, I think the ending works well and spins out in a way people won't expect.

To put the frosting on the cake, I did a commentary track of the fourth issue for Comic Book Resources. I'll edit this and post a link when it goes live today/over the weekend.

(Edit) Here's the linkage to the commentary track of #4. It basically spoils the whole finale of the series so, if you care about that kind of thing, I would recommend reading the issue first.

http://www.comicbookresources.com/news/newsitem.cgi?id=12663
Posted by keith champagne at 11:16 AM 11 comments:

Hope everyone out there had a nice Christmas. If you're a friend of mine and didn't get a Christmas card, it may not be because you've been blacklisted. Or it might be but probably night. More than likely, it's because I haven't gotten around to sending them yet. We got Jack's picture taken a little later than usual this year but have every intention of getting them sent out before next Christmas.

Anyway, the second installment of Hamster Droppings went live today at Newsarama, wherein I interview Don Chin. It's the first time I've ever interviewed anybody so I did the smartest thing I could and copied the Vaneta approach, attempting to make it seem as if Don and I were talking instead of emailing.

http://forum.newsarama.com/showthread.php?t=140790
Posted by keith champagne at 6:20 PM No comments: 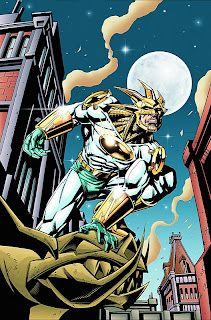 OK, I have no idea how to actually spell potpourri. Potporri? Potpouri? Ah, who cares.

ARENA #3 arrives at your friendly neighborhood comic book store today. I got my copies yesterday and was really happy with the way it read. Which doesn't mean it's any good, just that I was happy with it. But if you're enjoying the book to date, I don't think #3 will make you my enemy.

In other news, DC announced their March solicits the other day and I've got nothing new shipping in March. However, I was surprised to see:

From writers Grant Morrison (52, BATMAN) and Mark Millar (Ultimates, Civil War) comes Aztek, the visionary hero from the 1990s! In these stories from Aztek: the Ultimate Man #1-10, Aztek fights the forces of evil in Vanity City, where he meets costumed characters including Green Lantern and The Joker!
Advance-solicited; on sale April 30 • 240 pg, FC, $19.99 US


Weird to see this long-ago-cancelled book dusted off and collected out of the blue. I really loved Aztek. As an inker, I literally had no idea what I was doing on each page but it was a very fun, sly read thanks to the two writers, whom you may have heard of before. I have no idea what Drew Geraci is doing in the solicit. He's a really good inker but I don't remember him working on the book, I think every issue is all me. Anyway, I've inked many a comic over the years and when people ask at conventions, I always list Aztek (and Young Heroes In Love) as my two favorites.

I don't expect to have anything new solicited until May, when the project I'm writing now is scheduled to begin shipping. For anyone who cares enough about my career to play detective (Hi, mom!), for reference on my desk, I have copies of Batman: Year One, The Killing Joke, and The Man Who Laughs.

I might do a post about The Killing Joke at some point. It was interesting to read it again after all these years. Holds up pretty darn well.

Building up to the release of the new Adolescent Radioactive Black Belt Hamsters next month from Dynamite Entertainment, I'm writing a series of four columns for Newsarama, sort of a behind the scenes production blog and interview series to (hopefully) drum up some noise and interest in the book. The first one went live today.

I proofread a PDF of the first issue of the Hamsters this afternoon and I think it's coming together nicely. A little tweaking here and there and we got ourselves a real, live comic book. 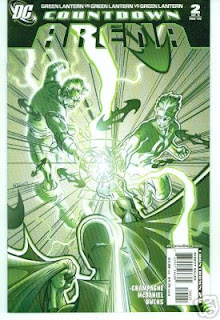 Merry Xmas!
Posted by keith champagne at 10:00 AM 1 comment: ARENA #2 ships tomorrow. I think now that the necessary exposition and set up has been handled in the first issue, the second really hits the ground running and the story has room to begin building. So if you enjoyed #1, the second issue is a much better read, at least in my opinion.

If you didn't enjoy #1 (and I read one blistering review-coughfuckyouIGNcough), go ahead and skip the rest. I won't be offended. From my admittedly limited skimming of the Internet for reaction, it seems to be running about 70-30 in favor of the book. Most of the negative opinions seem focused on a disenfranchise with Countdown in general, carrying over those hard feelings onto my project. Nothing I can do about that, I just hope the book is judged on its own merits when all is said and done. There's definitely a second level running beneath the surface of this story and there is an actual story running through the book. Sure, it's Monarch's story but it's more than you might be expecting.

As a little Easter Egg, here's the original version of Page 5 from issue #1.
Posted by keith champagne at 7:39 AM 16 comments: 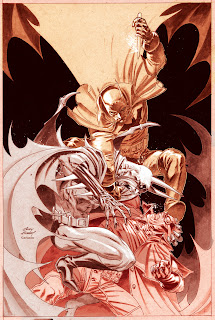 Bring it on, Internets!
Posted by keith champagne at 11:34 AM 6 comments: 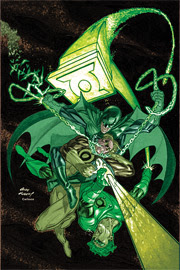 There was an advance review of ARENA #1 posted on Newsarama this morning, here's the link:

The reviewer had a couple of issues with it and, while it's probably a waste of time, I want to take a second to rebutt a couple of points he made.

REVIEWER'S THOUGHT: "While it’s ably rendered by McDaniel and company, and while Champagne manages to capture distinct bits of characterization from a vast cast that’s drawn from dozens of specials and mini-series from the past couple of decades, it represents in many ways a certain cynical approach (a spin-off mini of a 52-part weekly that you need to read in order to understand parts of the initial 52 parter that won’t actually finish until another mini next year) that’s the worst by-product of plot-first event comics."

KEITH'S THOUGHT: For better or worse, the business model at both Marvel and DC these days is predicated on 'event' comics. Big stories, editorially driven, maximized with spin off books to capture more of the reader's dollar. ARENA is one of those books but, while it is a spawn of Countdown, it also stands as a self-contained story with a beginning, middle, and a definite ending that then joins back up with the mothership to tell the next chapter. I'd like to see it judged on its own merits: Plot, script, art, colors, if possible, and not slammed because the primary nature of its existence is to make a buck.
Posted by keith champagne at 7:46 AM 2 comments: 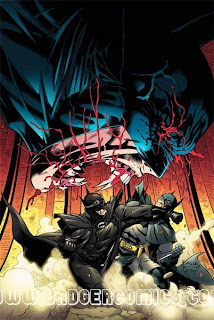 Got this in my email this morning. Sure, it disrupts my cover-posting-COUNTDOWN to ARENA #1 but it sure does look nice in color!

From what I've seen, the big head theme runs through Dale Eaglesham's other variant cover too.

I'm pretty sure the actual printed version won't have www.badgercomics.com plastered across the bottom. This must have been lifted from their website.
Posted by keith champagne at 6:31 AM 1 comment: