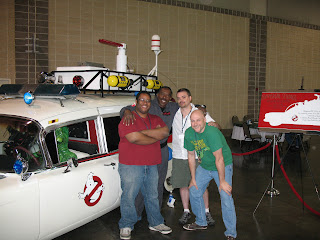 At the San Diego Convention over the weekend, IDW announced during their Saturday panel that I'm writing the revival of the Ghostbusters, a four-issue series we tagged GHOSTBUSTERS: THE OTHER SIDE, beginning in October.

Here are some links to interviews about the project. I even got interviewed by MTV for this one, kind of a nice change of pace. I still heart Vaneta the most though, she always does the best job and one Newsarama reader even called me a douchebag in the comments section. Gotta love my adoring public!

I've done a lot of soul searching this year over the type of projects I want to write, something I'll probably blog about more at a later date. The key for me though, my new manifesto in terms of writing gigs can be boiled down into one word: FUN.

Writing Ghostbusters is pure fun and working with Chris Ryall/IDW (and now, Andy Schmidt) has been an absolute pleasure. Top it off with getting to work with my friend Tom on art and I've stumbled into a great situation with this project. I'm a lucky bastard, plus I get paid thousands of dollars a decade!

Speaking of fun, I have another announcement to make but I wanted to hold off until after the San Diego show so it wouldn't get lost in the shuffle. Maybe in another week or so, maybe even on my birthday would be appropriate.

Thanks for reading and if you see any ghosts, give me a call!
Posted by keith champagne at 6:44 PM 5 comments:

Who Watches The Watchmen?

I just saw the first Watchmen trailer and it literally took my breath away.
Posted by keith champagne at 5:56 PM 7 comments: 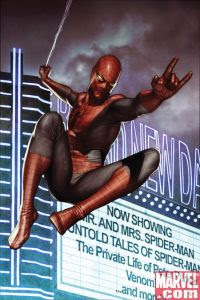 I've gotten kind of jaded over the years to seeing my name on covers or in solicitations, that sort of thing. But I have to admit, I got a little tingle when I saw Marvel's solicitation for this book. I actually started my career at Marvel back in 1993, haven't done any work there at all since '98, and have never written for the company ever.

So to me, this is really exciting! I'm now an extended part of Spider-Man's family!

Your Spidey-Senses are about to tingle a bit more with the debut of Amazing Spider-Man Family #1! Exploring the lives of Spider-Man and the rest of his Brand New Day cast, this brand new series kicks off with 104 pages of friendly neighborhood action! What happened the day after Uncle Ben died? J.M De Matteis & Alex Cal have the answers! And what was life like for Mr. and Mrs. Parker before May “Mayday” Parker was born? You’ll get he answer, courtesy of Tom DeFalco & Ron Frenz! Take a look back at the origin of Venom and a special Aunt May Story by Keith Champagne & Shawn Moll! Plus, your first look inside the Marvel Apes universe, as Karel Kesel & Ramon Bachs, the creators behind September’s simian sensation, reveal the secret origin of Spider-Monkey!

Wrapped up in a jaw dropping cover by Adi Granov, Spidey fans can’t miss the all new Amazing Spider-Man Family! 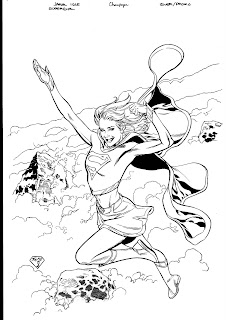 The last month or two has been grueling healthwise but I think I've finally got this Lyme Disease out of my system. Aside from some aching joints in my fingers and my knees feeling like an old man, I seem to be pretty much back to myself. So a word to the wise from your Uncle Keith, kids. If you've got an insect bite on your body that, instead of going away, grows to the size of a softball, get it checked out before it turns into a bulls eye. Trust me, you won't regret it.

On the work front, I've spent the past week or so inking an 11-page Spidey/Aunt May story (that I also wrote) over Shawn Moll which I'm pretty sure makes me the only writer alive to have worked with the entire Minnesota Wrecking Crew. I believe this story will be out in August in the new Spider-Man Family anthology book, with guest appearances by my two brothers, Kenny and Kyle, and my niece Samantha, all of whom have characters named after them.

All of which is a good warm up to get back in the inking swing of things, as I'm expecting to start Supergirl over the next week or two (Am I close, Jamal?). Anyone who reads my blog knows I love working with Jamal but on our next project together, I think we need to switch things up and work as writer/penciller instead of penciller/inker. Hear me, Big Poppa?

The San Diego Convention is looming and, while I won't be there this year, I should have at least one, possibly two writing projects announced. The first is a project that I'm writing for IDW and the second is a creator-owned series, a western that's already attracted quite a bit of Hollywood interest. Which means nothing, really, but it makes me feel cool to pretend I'm a player. There's also a chance that DC will announce one of two projects I'm writing although I've learned not to get my hopes up there the last few months.

While I'm thinking of Supergirl, let me take another stab at posting the Supergirl promo that Jamal and I did. I freely admit I got a little lost interpreting the mountain peaks, sorry they suck. I'm a little rusty but Rome wasn't built in a day.

That's all for now, unless you're my favorite moral authority. Then you must finish reading this and TURN TO THE RIGHT!
Posted by keith champagne at 6:12 PM 4 comments: