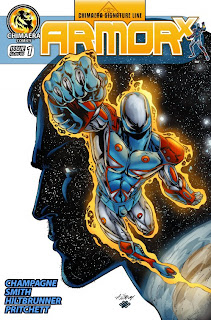 I'm super excited to announce that the collected edition of ARMOR X will finally see print as part of Chimaera Studios "Signature Line."

I'm planning on taking a "Director's Cut" approach to the collection. Aside from some odds and ends at DC, ARMOR X (trivia: The X is actually the roman numeral for ten) was my first real writing work I had published in comics. It's hard to look at it now and not see a lot of warts. So I'm going to fresh it up a bit and make it shine.

Hopefully, if the trade performs we'll finally get to produce the next series (of three that I originally intended on).
Posted by keith champagne at 2:00 PM 2 comments:

the NEW greatest picture ever! 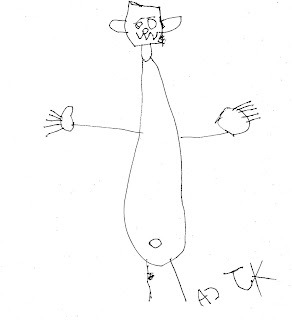 Jack drew me a picture of a really scary monster a couple of days ago. To me, it's better than looking at the ceiling of the Sistine Chapel. I'm particularly proud of the bellybutton, eyebrows, and five fingers on each claw.

The best picture ever! 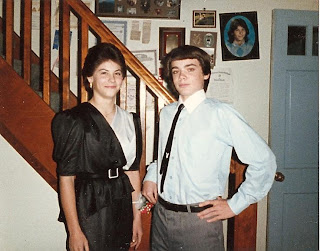 As the 20 year high school reunion for my class gets closer, a networking website has sprung up where former classmates can say hi, post pictures, that kind of thing. So here's a doozy that made me laugh out loud when I saw it.

This is my friend Dawn and I shortly before going to our freshman year homecoming dance. All I can say is WOW!! Fourteen year old Keith Champagne was not only quite a ladies man, he was also an icon of style! I don't know what's up with my hair, I remember it used to flip up quite a bit as it got longer but man...that's something special.

Tom, if we see Prince Valiant at Fallcon this year, he and I will have something to bond over. Turns out I was rocking that haircut 20 years before he was!
Posted by keith champagne at 6:03 AM 8 comments:

For all the Ghostbuster fans out there... 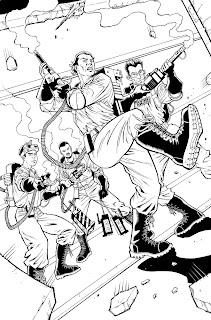 Because my blog has been overrun by Ghostbuster fans, here's a little something to keep you all fed. I'm not going to leave it up here indefinitely, just for a day or two, maybe less if IDW asks me to take it down. So consider it an easter egg and enjoy it while you can.

Just a quick reminder that SPIDER-MAN FAMILY #1 comes out today, with an eleven page Aunt May story written (and inked) by me and pencilled by Shawn Moll. I've yet to read it all put together so I hope it worked out OK. Let me know what you think.

Also, I believe the collected edition of Countdown Arena arrives in stores today. Everyone loves to shit on Countdown these days so I'm proud that Arena was one of the more popular of the offshoot series. Can't win 'em all but more people seemed to enjoy it than not.

That's all for now...
Posted by keith champagne at 1:35 PM No comments:

Two Birds With One Stone

I noticed on the comicbloc message boards that there was a thread about what questions/topics readers wish had been addressed at the DC panels in San Diego last weekend. Since a couple of them concern me, I instantly had the idea I would steal the topic and give myself something to blog about over here. So thanks to "oddballUK," the one who started the thread.

The first question/statement was:

Keith Champagne has mentioned on his blog an upcoming DC project with Doug Mahnke that has yet to be announced.

Yeah, tell me about it! This project is completely written and, to date, Doug has drawn about a third of it. The work he's done so far has been absolutely STUNNING, the best of his career. The problem here is that Doug was needed more urgently for a couple of Final Crisis books and he's then been booked onto some Green Lantern stuff. The hope is when those obligations are finished, he'll have the time to finish our project. It's going to eventually be published in the prestige format, it's related to Gotham City, and even if I wrote a shitty book, Doug's art will make it well worth the wait.

And although this next one doesn't seem to be related to me, it actually very much is...

I was hoping for more info on Peter Tomasi's creator owned book for DC and something more concrete on the fate of the Nightwing book post-#150.

I can't speak for the fate of Nightwing post-150 but that ol' grizzly bear Tomasi has already named the creator-owned book in interviews. It's called THE MIGHTY. It's a twelve-issue series, not set in the DCU, co-created, co-written, (and co-owned) by Peter and myself, which is why I feel comfortable covering it here. Tomasi and I have written a few things together outside of comics, this is our first time doing it for DC. Peter Snejberg is about halfway done with the art for the fourth issue at this point and that's all I should say for now.