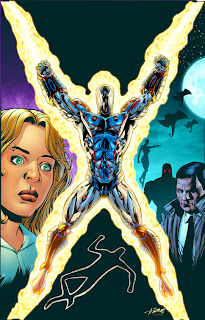 Sometimes, checking my email is a lot like Christmas morning.

That was definitely the case this morning when I got this little gem in the (e)mail from Moose Baumann, who was gracious enough to color Andy Smith's black and white art for the cover of the upcoming collected edition of ARMOR X.

It's pretty easy to see why Moose is one of the top color artists in the business today.

I'm not sure when the collected edition of Armor X is supposed to ship. I would assume it will be printed in time for either the San Diego or Chicago conventions. I've been redialoguing bits of it in my spare time so the collection will be along the lines of a remastered version. Hopefully, if it sells fairly well, Andy and I will finally get to do the next chapter.

Thanks, Moose!
Posted by keith champagne at 6:01 AM 4 comments:

As a wrestling fan, I'm stunned by the deaths involving Chris Benoit and his family.

As a father, I'm sickened and completely at a loss. I just don't understand how anyone could do something so horrible to their own child. 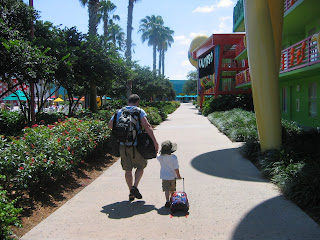 Back from the Disney vacation in Florida.

Around the time my wife Melissa took this picture, I remember thinking to myself, "Why am I carrying every single F'n bag, dripping with sweat, and making sure Jack doesn't run diving into the pool while Melissa just lollygags around ten feet behind us, fiddling with the camera?"

But it turns out she was taking one of my favorite vacation pictures and I was wrong to be annoyed--as usual.

The whole Disney experience is fun but I'd definitely recommend going in April or October, when it's not quite as hot.

I'm one of the people who loved the finale of the Sopranos the other night. I felt the entire show was in keeping with the character of the entire series, and that the ending, while ambiguous, was spelled out clearly enough to provide the show with some closure. It just takes a little thought to put the pieces together.

Personally, I subscribe to the theory that Tony was whacked at the end. In the second-to-last episode, there was a deliberate flashback to a conversation between Tony and Bobby (who had just been whacked), talking about what it must be like to be killed. Bobby's point was that one would probably never even hear the bullet that did the job.

To me, that means Tony never saw or heard it coming.

A second train of thought that popped into my head is that, if Tony is still alive, the last five minutes of the show is some masterfully done television that conveyed, for a few seconds, what it must be like to be Tony. The tension that the viewer felt while watching the end of the show, waiting for something to happen and not knowing where it was going to come from, must be a lot like the minute-to-minute existence of Tony himself. He's always looking over his shoulder, always a marked man, never knowing when his life of crime is going to catch up to him.

I got a link in my email this morning to a newspaper write up of some of the various after-hours activities at AdventureCon. The author, a fella named Terry, was one of the many nice people I got to meet while in Tennessee, he was a pretty cool cat. Here's the linkage:


He's definitely on the money about a couple of things: Ethan Rom from Lost was a really nice guy and Billy Dee Williams did indeed seem to be a prick.
Posted by keith champagne at 8:55 AM 2 comments: 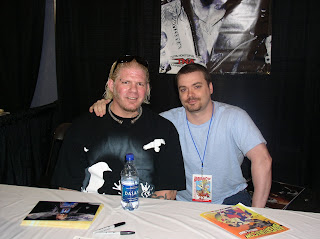 I met a few interesting people while I was at Adventure Con last weekend. One of them was the guy in this picture, a professional wrestler named Raven. Turns out that he's a big fan of comics and buys most everything from the big two, and was even familiar with my work.

I've met a few wrestlers over the years and they all seem like cool guys, Raven included.
Posted by keith champagne at 12:44 PM 1 comment: 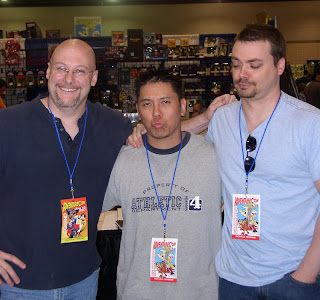 In the wake of Adventure Con...
Andy Smith, Tom Nguyen, and I have started a group blog together at www.tacotrio.blogspot.com.
Tom was nice enough to set it up and the blog is now live. We named it the Taco Trio after a menu item on a restaurant we dined in while in Tennessee.
Because I barely have enough to say to keep this blog going, I'll probably cross post between the two blogs and try to think of some unique content for both periodically. I'm sure Tom and Andy, who are both much better artists than myself, will post up sketches etc. from time to time, as well as stories about the business and news about their careers.
If you're interested, by all means add the site to your links and check it out.
Taco Trio...ASSEMBLE!!
Posted by keith champagne at 11:32 AM 1 comment:

Back from Tennessee, where I had a nice time at Adventurecon. I'll blog about it later this week when I get caught up on things.

Out of curiosity, does anybody out there know how to say "Boy Scout" in Russian or "goddamn" in German? I'm not having much luck with online translators but I'm thinking super geniuses (geniusi?) like Mr. Ninja or Brad Brown will know...because they know everything and can make up the rest.

Thanks!
Posted by keith champagne at 11:34 AM 9 comments: