Tomasi and I recently did an interview with the comic people over at Ain't It Cool News to promote The Mighty. Here's the linkage, enjoy! 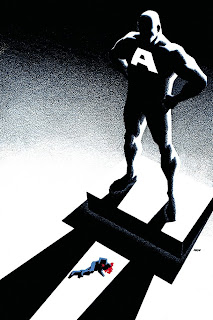 Ramping up to begin blogging again. DC Comics released their solicits today for books shipping in March 09. Hard to believe a new year is almost upon us already. I won't be sad to see 08 end, I'm looking forward to a symbolic fresh start.

THE MIGHTY #2
Written by Peter J. Tomasi & Keith Champagne
Art by Peter Snejbjerg
Cover by Dave Johnson
Section Omega is in chaos, and Lt. Cole and the hero known as Alpha One must work side by side for the first time! But in his quest to bring murderers to justice, Cole is in way over his head! When the two locate the villains responsible for the recent trouble, the fight doesn’t go as planned, and Cole finds that being partnered with the world’s greatest Super Hero isn’t what it’s cracked up to be. The consequences of their first battle together will leave even the great Alpha One shaken!
On sale March 4 • 32 pg, FC, $2.99 US

“Who is Superwoman?” part 3! Supergirl continues her manhunt for Reactron, determined to bring him to justice for the heinous crimes he committed in “New Krypton”!
Meanwhile, Lois Lane and Inspector Mike Henderson investigate the appearance of a dead body in Metropolis Harbor. Whose body is it and what could it have to do with the new Woman of Steel? Find out as the big mystery of 2009 continues!
On sale March 18 • 32 pg, FC, $2.99 US
Posted by keith champagne at 5:55 PM 2 comments: