This past weekend, DC Comics announced the new Supergirl creative team at the Chicago convention. So let me throw my name in the mix, because inkers don't really get acknowledged in that context.

So...for the seven people that care, I'll be digging out my brushes and pens and coming out of inking "retirement" to join Team Supergirl. Jamal was nice enough to call and ask if I'd be interested and when Big Poppa asks, I say "How High!"

I worry about having the time to properly handle a monthly book again. I'm simultaneously juggling a few different writing projects with five more in various stages of development but, let's face it: having too much to do is the best kind of problem to have in this business. I'm hoping to produce the first six issues with Jamal and then pick my head up, look around, and see what kind of shape I'm in.

So keep one eye up in the sky...we'll try to put together a good book for everyone to read.

(PS- a blogspot "internal error" is keeping me from posting the inked Supergirl promo piece. I'll pop it up when I can.)
Posted by keith champagne at 12:08 PM 7 comments: 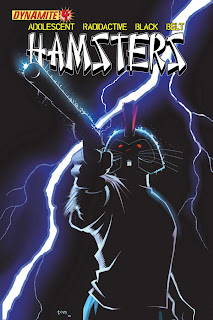 Well, I'm a little behind the eight ball on this one but it's worth mentioning that Black Belt Hamsters #4 arrived in stores last Wednesday. I've had a hard time plugging this book because I'm never quite sure when they're going to ship.

But the eagle has landed.

Honestly, this entire issue was one big punchline built around the old Richard Gere Hamster rumor, the character of Richard's last name was even "Gear, " spelled differently to avoid any legal problems. Dynamite got squeamish at the last minute and removed any references to Richard Gere or Gear, which is fine. It's their company, their call to do. But as a result, I'm not sure the big joke makes a lot of sense anymore. I'm hoping if/when the Hamsters is collected, I can go back into the dialogue and find a way to make it work again.

I hope the future will bring more Hamsters my way. I had a great time writing the book, working with Tom, and trying to make Don Chin laugh. Thanks to Dynamite for making it happen, love those guys.
Posted by keith champagne at 10:58 AM No comments:

Turn to the right! 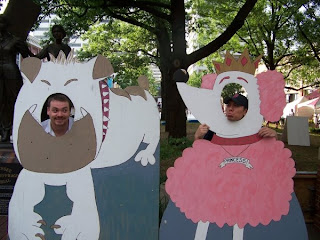 Wow, I really suck at blogging this month. Even my Adventure Con recap is way overdue.

Adventure Con came and went and a good time was had by all. I enjoyed spending time with Doug and Pat and Tom and Andy and Dev and Jamal during and after the show, as well as meeting Michael Golden, Mark Texeira (the funniest man alive), and Arthur Suydam. I never knew Doug Mahnke could bring a man down with the smooth, dulcet tones of his singing voice but his serenade reduced me to tears of hysterical laughter.

The comic readers down in the Knoxville area seem to be about as nice as they come. I'm used to people lying and saying they enjoy my work but I almost believe the Knoxville-ians. It's nice to also see the familiar faces of people that I met last year at this same show, sort of a small family of friendliness down south. I got to meet a few of the media/movie guests and the Smith and Pyle concert after hours on Saturday was a blast. A big thanks to Brandon Mysinger for setting the whole thing up and bringing us all down to Tennessee for the show. I hope to be back next year.

On the work plate this week, I'm finishing the script for the first issue of a project Andy Smith and I are doing for IDW. I'd like to get a couple in the can before I make my return to the monthly inking grind next month, reuniting with Big Poppa himself on our new assignment for DC. And anyone who thinks the only thing Jamal can do is draw has never seen that man dance!

That's about all the up I can think to date at the moment. So, one last thing just for you, Pat (you know it's coming...)

TURN TO THE RIGHT!
Posted by keith champagne at 10:18 AM 2 comments:

Thanks to the few that posted below in the Artist Wanted thread. It looks like in this case, the mountain came to me and I think I'm all set. I'm sure I'll post more about this project in the coming days.

Off to Adventure Con in Knoxville Tennessee in literally ten minutes. Got to head to the airport and hit the skies. There's a great crew of comic book artists attending, including my beloved Minnesota Wrecking Crew of Doug Mahnke, Pat Gleason, and Tom Nguyen. Big Poppa Jamal Igle and my frequent collaborator, Andy Smith will also be in town, as well as many others. It was a fun show last year and this year looks to be bigger and better.

Back soon!
Posted by keith champagne at 6:13 AM 7 comments:

Ever wanted to be a comic book artist? Or maybe you are a working artist in the wonderful field of comics and are looking for a project to draw on the side. Or perhaps your mother has long harbored a secret dream of drawing comics and you want to help her to achieve that elusive, life long goal.

Leave your contact info or website/portolio link in the comments section and I'll touch base with you soon after. If you think I'm an astonishingly gifted writer that you need to work with before you die and also have a love for the old west, we might just be soulmates.

Thanks!
Posted by keith champagne at 8:04 AM 6 comments: