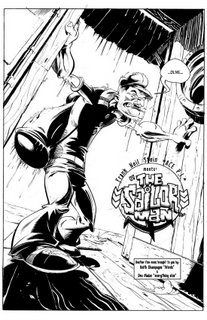 And with this, the third page of Sailor Man, the plot officially begins.

Not much to read here so I'll post another page tomorrow. Judging from comments and emails I've gotten, everyone seems to like this so maybe I'll speed things up a bit in general.

Thanks for reading,
Keith
Posted by keith champagne at 6:38 PM 5 comments:

Two years ago today, at 5:03 AM after the craziest all-nighter of my life, I became a father for the first time.

In the past two years, I have been peed on. I have been pooped on. My son has thrown up (twice) while I was flying him around the living room, once directly into my open mouth--on my brithday, no less. I don't think I've slept past 6:15 once in the last 730 days. My level of debt has slowly climbed as I try to support my family on one income instead of two. I work out less, I work more, I've started getting gray hair, and very rarely can I stay awake through a whole movie anymore.

In other words, it's been--BY FAR--the best two years of my entire life. 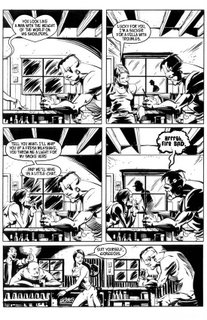 I can feel my week already slipping away from me--deadline wise--which is kind of scary considering it's only Monday. So while I have a second, here's page two.

This is where Dev started surprising me, still following the script to the word but kicking in with the characterization, acting, and body language he does so well.

For anyone joining us late, scroll down for page one first.

Thanks for reading,
Keith
Posted by keith champagne at 12:17 PM 2 comments:

THE SAILOR MAN (page one) 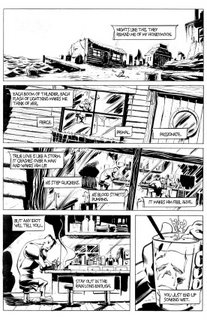 It took a few extra days to get this story finished up but Dev and I are fully locked and loaded.

My plan here is to post a new page every few days. I have to say, it's going to be a loooooong six days because I literally can't wait to post up page three. This is a story I've literally had in my head since I was in college about fifteen years ago. I changed it up a little to include our Frankenstein character but it's essentially the same and to see it finally brought to life so beautifully by Dev...I actually got misted eyed for a second.

Enough from me. Sit back and enjoy the awesomeness that is Dev Madan with a little something that we call...

The Sailor Man.
Posted by keith champagne at 1:53 PM 6 comments: 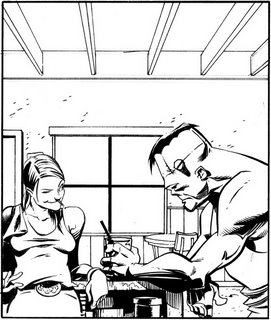 I'm going to try to do something a little different here over the next few weeks and post up some original work in a serialized form on the mighty blog.

My friend Dev and I, over the last couple of years, have produced a few short comic stories just for the fun of it. They're written by me with all the art and lettering (and sometimes gray tones) being done by Dev. Like I said, we do these off and on for fun. It's not commissioned work, it's not published work. It's just two friends who love comics being goofy.

The leading man of all of our little comics is Frankenstein. But for whatever reason (and I don't think either of us remember why anymore), Frankenstein is a private detective in these stories. He lives in a city called Monster Town, nursing a heart that was shattered when Bride of Frankenstein left him for the Wolf Man, and shambles around falling into adventures with other famous fictional characters. It's a strange little recipe for a comic but we like it--even if it doesn't always make a ton of sense.

At the moment, we're finishing up a new 12-page story, our personal Watchmen of Frankenstein stories. I should be writing the last two pages of that right now instead of sitting here blogging. Anyway, I think next week I'll start to serialize this new story and maybe post a new page every few days or so. Collect 'em all, kids!

Speaking of, after this one, we're going to produce an 8-pager and collect all the Frankenstein stories into one self-published comic. It'll be something cool to sell or give away at conventions and it'll be fun to have everything printed up in one book.

So if that sounds like your cup of tea, check back soon. And tell a friend!

Thanks for reading,
Keith
Posted by keith champagne at 6:12 PM 3 comments:

Woke up this morning

I woke up this morning having seen the season premiere of the Soprano's on HBO last night. It's been a long time since Tony and the crew have popped up fresh out of the oven and I was looking forward to catching up with the gang. I love the Soprano's to the point where I actually did quite a bit of clock watching yesterday, mentally counting down until the new episode aired.

I don't think it was great but I liked it quite a bit.

First of all, I like the way that the same amount of time passes in the Sopranos' Universe as does in ours. It's been a couple of years since the last season ended and that same amount of time has passed in the context of the show. I thought the show did a great job of very quickly and nimbly bringing the viewer up to speed on the major developments in the character's lives. Tony and Carmella are back together, having a pretty good time. Janice and Bobby have a fifteen month old baby. A.J. is in college. Meadow has abs now. The Feds are still closing in on Tony and it almost seems like every other mobster is now wearing a wire.

The main narrative thread of the episode was a mobster (Was his name Gino?) inheriting a couple of million dollars from his aunt and wanting to retire from the 'life' and move his wife and family down to Florida. Tony, who doesn't even care enough to tell the guy directly, passes on through Silvio that his request is denied and he isn't going anywhere.

The mobster, who is also an informant for the feds (and they won't let him leave either), being caught between a rock, a hard place, and his shrew of a wife, hangs himself to death in the garage.

Then the increasingly mentally diminished Uncle Junior mistakes Tony for a burglar and shoots him in the gut. Tony spends a few minutes trying to crawl across the floor to a phone, manages to call 911, then seemingly...dies. Pretty unexpected twist ending there, I liked it.

Of course, I don't think Tony is really dead. Maybe he'll be in a coma or something but I've already seen clips of him flirting with Julianna Margulies in a later episode so I'm sure he'll wake up eventually.

The show spent quite a bit of time on Gino and his desire to get out and start fresh. My suspicion is that when Tony gets out of the hospital, his brush with death will do the same for him. And even though the rules (Gino took a blood oath) prevented Gino from leaving, I wonder if those same rules will apply to Tony. Normally, Tony seems to hold himself to a different standard than everyone else so it would be an interesting avenue to explore.

Also, Janice totally has no love for her new baby. She's the reincarnation of she and Tony's mother, who didn't love her own kids. The cycle of abuse continues in the Soprano family.

I'm looking forward to watching this season unfold. It's off to a good start.
Posted by keith champagne at 1:09 PM No comments:

Now only partially remembered, it was a strange dream nonetheless.

I was in Japan, a member of an elite task force designed to fight to their deaths against...something. I can't remember what anymore but I know they were bad. And deadly. And they probably didn't smell so good either.

There was a drill sergeant attached to my group, a cantankerous old Clint Eastwood type except he had no eyes or, if he did, he kept them closed so tight that they might have fused shut. Every word out of his mouth was barked in stereotypical R. Lee Ermey, Full Metal Jacket style.

He and I, we didn't get along.

While the rest of the squad was out doing cool, elite task force stuff, I was confined to a small, cramped Japanese apartment and forced to engage my drill sergeant in a philosophical debate about life and violence and even love. I can't remember our verbal exchanges word for word but I was surprised at how smart and perceptive he was, in spite of his R. Lee Ermey exterior.

When the task force was finished task forcing for the day, they all returned to the apartment to take a load off and treat their wounds etc. Once they returned, I was ordered by my drill sergeant to leave. When I refused, he grabbed my collar and pushed me out the door.

I remember asking what was going on and why I had to leave.

His response? "Get out of here so we can watch the Soprano's."

Make of that what you will.
Posted by keith champagne at 7:05 AM 5 comments: