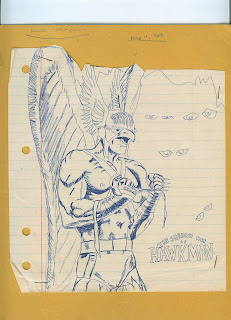 I found this piece recently and thought I'd share it with the world. It should give you a pretty good indication of how I filled my time one afternoon in detention from Biology Class on May 11, 1985. I got a lot of detentions in Biology Class, Mr. Friedmann and I never got along all that well. Probably because I was a wiseass and spent most of my time in Bio either passing notes or drawing in my notebook.

The funny thing is, in spite of the fact that this piece of art is 22 years old, I actually remember laboriously copying this from a DC house ad for the new Hawkman title that was coming out. I'm pretty sure the background was supposed to be all black with eyes peeking out but, even back then, I hated backgrounds.

If anyone out there can find the actual house ad this was drawn from, feel free to email it to me. I'd love to post it up here.
Posted by keith champagne at 2:48 PM 3 comments:

I was out all day today but when I got home and surfed the net to see what I missed in the world of comics, I noticed that Newsarama had posted the ARENA interview that Vaneta conducted with me last week. Here's the linkage:

I scanned through the interview and comments section and I'm happy with the way it came out. Vaneta always does a great job at making these things seem casual and conversational. The comments section mystifies me, though. It's easy to see why so many comics creators avoid reading Internet opinions. If you guys hate comics so much, or hate the direction that DC is going in so much, stop buying. That's the most effective way to bitch. Arena is much more than anybody is going to expect though, so keep an open mind.
Posted by keith champagne at 5:32 PM 3 comments: 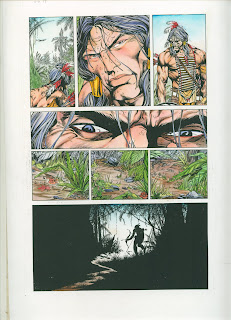 I posted this on the Taco Trio blog earlier this week but thought I'd slap it up here too, because I don't have much new to say at the moment.

It's a little known fact that my first real gig (aside from background inking for Tom Mandrake and Ken Branch) was a brief stint as a colorist for Valiant. I was young, kind of nervous about the whole thing, and didn't feel good enough to be working full-time so I handled my insecurities in the most mature way possible. I just stopped showing up and went home to CT for the summer instead.

Valiant called me about a month later, finally figuring out that the quiet kid had disappeared for a while. I forget what excuse I made up, but they got the message that I wasn't coming back. I'm sure I was never missed and, luckily, I gained a little self confidence the next time I got an opportunity for professional work--inking X-books for Marvel, which is where I got my start as an inker.

Here's a coloring sample reminiscent of my brief Valiant days. This was painted with Doc Martin dyes on photocopy paper, which was adhered to a thicker piece of cardboard to keep the paper from curling up and warping.
Posted by keith champagne at 9:44 AM No comments:

For anyone interested in checking it out, DC and Dan Didio have announced the big project I've been laboring on the past several months, a little something called COUNTDOWN: ARENA.

I completed a follow up interview yesterday, so I assume that will be posted over the next few days to give out a little more info.
Posted by keith champagne at 12:17 PM 5 comments: 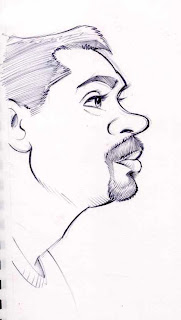 I thought I'd throw up a caricature that Tom Nguyen drew of me while we were in San Diego. Tom managed to whip this out in one of the rare moments that he wasn't hospitalized or swarmed by rabid fans.

Looking at this, all I can think is that it's just not fair that one man gets to be so goddamn good looking, is it?
Posted by keith champagne at 5:45 AM 3 comments:

Well, I took the redeye flight home from San Diego Sunday night, arriving back in good ol' CT about 9:30 Monday morning, bleary eyed and sick but glad to be back home.
After a couple of days to recuperate, be a dad, and get caught up on life, not to mention see The Police in concert (Sting sounds better than ever), I figure it's time to detail my convention exploits. The truth is, there aren't many exploits to exploit here for the sake of my blog and it's 14 faithful readers, give or take about 800 hundred.

The thing with Comic Con is that it's gotten so damn big, somewhere along the way, a lot of the fun of the show got lost in the crowd. In terms of my career, I don't know if I accomplished anything that I couldn't have just as easily done through email or phone calls. Sure, it's helpful to get some facetime with different editors or meet people from different companies but when that facetime is interrupted 30 times in five minutes by vast throngs of people saying hi, it's not doing much good.

Still, I enjoyed catching up with rarely seen friends like the great gentleman that is Pat Gleason or the legendary Brazillian Kid, Sergio Cariello. I bumped into an old Kubert School classmate, Mr. Dan Curto (www.rebelscum.com), and spent a half an hour catching up and reminiscing. I got to reconnect with former DC and current Wildstorm editor Scott Peterson for a few minutes, who I'm now developing a pitch with. I paid too much for Mrs. Field's cookies and diet Coke, saw Jessica Alba from thirty feet and behind just as many security guards, did a triple take at the sight of the one-legged model dressed as the one-legged character from Grindhouse (she's got the market cornered for that job), and spent some time with a young actor named Bret Harrison (starring in the upcoming series The Reaper), who is a friend of my friend and talented writer, David Baldy (Keep an eye out for their upcoming JSA Classified story, it's gonna be great!).

And of course, there's the Taco Trio, who I didn't see that much of, all told. We all seemed to be going in different directions: Tom was, unfortunately, hospitalized for a chunk of the show and Andy had a busy agenda himself. There was the almost-brawl after dinner one night, a great meal at the Brazillian BBQ joint I always try to get to, and of course...the softball game, where Marvel defeated DC 15-9 (and because it was a charity game, I won't dwell on some...dubious...umpiring that cost DC the game in the 5th.)

And there's more, but this is already getting plenty long and more boring than I intended.

I do think it's funny how, when you're walking around a convention center with 140,000 other people, it's odd how I tend to bump into the same five or six every day. I do enjoy the fact that I've cultivated a nice group of friends and acquaintances through the convention circuit over the years that I can now count on as smiling faces far from home. And overall, I think anyone with a true love for Pop Culture should go to San Diego at least once, to take in the madness and tell their tales from the belly of the beast.

As for me, I think that unless DC for some reason (at this point there's not much of one), some day wants to bring me out to promote something at the show, I would definitely go again. But I've been there and done it at this point, many times over. I think next year, I might try Wizard World Chicago, the SECOND biggest show, just as a change of pace. It's more about comics and less about pop culture, and as amazing as it is to experience, San Diego is really less and less about comic books each passing year. It's morphed into something else entirely.

Thanks for reading.
Posted by keith champagne at 5:54 PM 2 comments: