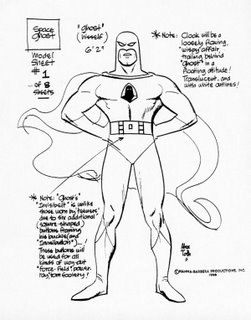 I was going to write something about the destruction of legendary MMA fighter Royce Gracie at the hands of Matt Hughes (and I probably still will) but then I learned that Alex Toth passed away yesterday and that's much more important to me.

I'm not one to eulogize, especially someone that I didn't know personally, but I was deeply saddened to hear about the death of Mr. Toth, who passed away yesterday at his drawing table at the age of 78.

You'd be hard pressed to find anyone currently working in the comics field who isn't influenced, directly or indirectly, by the work of Mr. Toth. He's probably best known for his design work on too many classic Hanna Barbera cartoons to name. Some of the more notable ones are Johnny Quest, Space Ghost, Herculoids (my personal favorite cartoon of all time) and Challenge Of The Superfriends (my second favorite). He also had a long career in comics. His last published work (that I've seen) was a Batman: Black and White cover a few years back. Like the best Toth work, the composition was simple, subtle, and perfect. The drawing was refined to the point of being minimalist, which was what made his artwork so great. He drew so much by drawing so little.

Anyway, like I wrote above, you'd be hard pressed to find an artist working in comics today that hasn't either studied Mr. Toth's work or studied the work of an artist who studied Mr. Toth's work. His influence over the last few generations is quiet, yet staggeringly far-reaching. I would list names but really...it's everybody that will ever draw comics, in one way or another.

He was one of the geniuses of our little field and I loved his work. It's sad to lose yet another legendary artist but, in a strange way, I find it comforting that he passed away at his drawing table, doing what he loved. Not to be melodramatic but I can think of a few million worse ways to go and none quite so appropriate.

Thanks for reading,
Keith
Posted by keith champagne at 6:47 PM

Safe journey Mr. Toth.
Many thanks for the Invisi Belt. I've pressed the 'Tom Foolery' button everyday since I first watched Space Ghost so many years ago.

Like most people I was a fan of Mr Toth through his many contribution to the HB animated universe, which I still have a fondness for. Alex did a lot of other work that most people probably aren't familiar with...I think Steven Grant gave a pretty good run down in one of his archived columns over at comicbookresources.com. I wouldn't be surprived if Steve didn't devote at least a little bit of his next column to Mr Toth. And let's not forget the Cartoon Network's adult swim which still features Space Ghost and Birdman...Attorney at law.